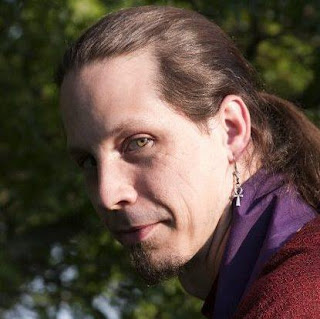 Bill Duvendack is a lifelong practitioner and student of the western mysteries, as well as being an internationally known astrologer; specifically, an esoteric astrologer, medium, presenter, psychic, teacher, clairvoyant, and author. With 13 years of teaching experience, Bill brings practical applications of metaphysical teachings. He is an ordained priest and bishop in Thelema who can provide ceremonies of any faith and type in accord with one’s beliefs. He has performed everything from weddings and handfastings to baby naming and blessing ceremonies, as well as remembrance services. He is initiated in the Golden Dawn tradition, the Deboran tradition of witchcraft, and is ordained through the EGNU. Additionally, he is the high priest of the Temple of Ascending Flame.

When it comes to astrology, he is a lifetime member and President of the Astrological Association of St Louis, where he lectures frequently. He has also written articles for many local papers, and has a monthly blog and free electronic newsletter on his website. He writes monthly horoscopes for the metaphysical resource center Pathways where he teaches classes on astrology and the western esoteric tradition, meets with clients, and gives divination readings. His monthly Sun sign horoscopes are also available on his website.

He has presented in many different venues, ranging from public libraries, high schools and colleges, to private groups and gatherings, media appearances on Fox television, NBC, and the CW; interviews with local papers, and has been interviewed by the NY Times and RTE 1 radio from Dublin, Ireland, in addition to local radio station KMOX.

Regarding the Western Esoteric Mystery Tradition, he has been working with that system for 31 years and has much experience with its teachings. He is an internationally published author of six books written about different aspects of the western tradition: “Vocal Magick” and “Spirit Relations” were published through Immanion Press, “In the Shadow of the Watchtower, Enochian Grimoire Volume 1,” and “Dark Fruit, Enochian Grimoire Volume 2” were released through Sirius Limited Esoterica, as was “Sat En Anpu,” a book of Anubis. “The Metaphysics of Magick” and “Astrology in Theory & Practice” were self-published, and “Awakening Lucifer,” co-written with Asenath Mason, was published through Become a Living God. He also has over a dozen essays published in various anthologies from a variety of publishers, and many of his magical writings have been translated into six different languages. Many new essays are on the horizon, as are new book projects as well.

His skills and experiences include, but are not limited to, ceremonial magick and many of its more specialized branches, such as Enochian; shamanism, paganism of all types, familiarity with the Afro-Caribbean diasporic traditions, divination, evocations, invocations, Theosophy, working with semi-precious stones, ghost hunting and paranormal investigations, past life regressions, and exorcisms. He is a member of the Fellowship of Isis as well as BOTA. His experience also includes being familiar with and working with, Hinduism, in particular mantras and pujas, familiarity with Tantra, and Buddhism.